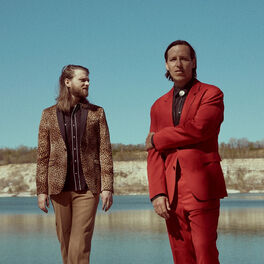 Waiting for the World to Turn

Top of the Hill

Come Back (Left Behind)

The War On Drugs

Top International hits - the best music of the mom

Top Hits - November 2016, a playlist by Playlist A

Complete with a fresh sound and a fresh look, Palace Winter return with their first new music in over two years. The band, led by Australian songwriter Carl Coleman and Danish songwriter/producer Caspar Hesselager, have announced new single ’Top Of The Hill’. The single is a statement of intent from a band who have written a collection of their most exciting and ambitious songs to date. Whilst keeping their widescreen, pop sensibilities, Coleman and Hesselager wanted to broaden their horizons on the new record, exploring hip-hop beats, 70s soul, 80s electronics and 90s guitars: “Jim James and St. Vincent producing Elliot Smith over Kendrick Lamar beats”. Despite being a melting pot of these styles ‘Top Of The Hill’ still sounds very Palace Winter: the band’s cinematic ambition and intricate production at centre stage, led by booming synth melodies and Coleman’s recognisable, bittersweet vocals, partnered with ghostly harmonies from Soffie Viemose, singer of Bella Union-signed experimental pop group Lowly. Thematically, Coleman describes the single as being “essentially the centrepiece of the whole record”.