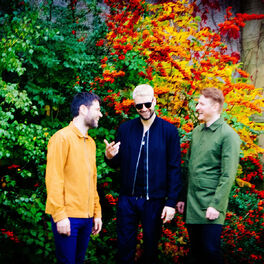 by The Courteeners, Blossoms

Hanging Off Your Cloud

Best of British by Louis Tomlinson

One of the most successful UK bands of the last 15 years, Courteeners are an English guitar group - Liam Fray, Michael Campbell & Daniel Moores - formed in Manchester in 2006. Lauded by Q Magazine as one of ‘the world’s biggest underground acts’, all of their albums have gone Top 10 – 2008’s St. Jude (no.4), 2010’s Falcon (no.6), 2013’s ANNA (no.6), 2014’s Concrete Love (no.3), 2016’s Mapping the Rendezvous (no.3) & 2018’s St. Jude - Re:Wired (no.5). Their eagerly anticipated new album ‘More. Again. Forever.’ is released on 17 Jan 2020. It follows on from gold selling album ‘Mapping The Rendezvous’ & the band’s biggest ever gig at Manchester’s Heaton Park this summer-a show that sold out all 50,000 tickets in just 3 hours. 2019 was the band’s most successful summer yet, a glorious few months that saw them headline Tramlines Festival,Kendall Calling & Edinburgh’s Summer Sessions. These exceptional shows were joined by rapturously received appearances at Glastonbury & Isle of Wight Festival, cementing their place as one of the country’s biggest and best-loved bands. And the reason? Well, that’s when we need to turn our attention to the band’s singer & songwriter Liam James Fray. A riot of contradictions–romantic, sensitive, brash, self-doubting & opinionated – it’s his songwriting, an acute observation of how life is mostly lived, that has fuelled the band’s longevity, striking a resounding chord with an increasing large bandwidth of young people across the country.