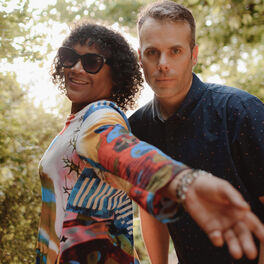 You Can Do It

Embrace Of The Sun

If the shoe fits, this Austin-based duo assuredly intends on making you dance in it. An amalgamation of roots ranging from Chicago House and Eurodance to Gospel and West Coast Deep House, the formidable force known as Glass Slipper—Brad Eller and Lisa Cork-Twiss—has developed a unique perspective for their take on dance music. Their diverse sound is effortlessly transferred into their fabled live shows, fitting them perfectly into any aspect of the programming of an event—from building the vibe in a room to peak-time bangers. A product of Houston’s music scene, Lisa grew up singing Gospel in the church. Inspired by her songwriting mother, her early entrance into releasing recordings saw her join the Eurodance group Real McCoy from 1996–1998. Brad forged his own path, cutting his teeth as a DJ during San Francisco's famed House music explosion in the early 2000s. Graduating from mixing records to live performance, he began making studio-based productions before moving to Austin. After reading a 2013 interview with Lisa and reaching out to her for a remote collaboration, the duo realized they both resided in the same area. It wasn’t long before this instant classic combination of her voice and his music led to the release of their first project. Since their first release, 2014’s “Surge” on South Africa’s Oh So Coy Recordings, Glass Slipper’s tracks have routinely placed in Top 100 charts and their productions grace the catalogs of high profile labels such as: Midnight Riot, Moulton Music, and POJI Records. Glass Slipper has certainly found the shoe that fits, and they are certainly going to make you dance in it.