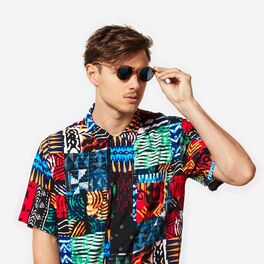 No one ever forgets the first time they watched Back to the Future, one of the most exciting teen movies of the 80's, with Michael J. Fox being sent by a mad scientist back to the 60's in an incredible DeLorean. We’re willing to bet our skateboards that in a few years we’ll all look back fondly at the excitement stirred up by “Flashback FM”, the first electronic album by the French Jérémy Souillart (Møme) and the L.A.-based Canadian Ricky Ducati (Midnight to Monaco), with its trip back in time through the glorious musical past of the 70’s, 80’s and 90's. Møme & Ricky Ducati, one hell of a duo. Music for Jérémy is a passion that nourishes his ambition to produce. After making it big with his hit “Aloha” (more than 200 million streams, triple diamond), the artist gained a following both in France and internationally with his first album “Panorama” (gold record) released in 2016. He then went on to release several EPs written during his travels and played in numerous concerts around the world, performing live at most of the major French music festivals, culminating in a show at the Olympia and several more at the Cigale in Paris. “Flashback FM” is new direction for Møme, artistically speaking. It is more personal and timeless, a project that is a good deal warmer than what he has done so far. It's a promise for the future and a modern return (using current technologies, sounds, effects) to the origins (structures, harmonies) of electronic music. Welcome to the time capsule playlist of the future! Møme & Ricky Ducati – Flashback FM (release date: 2021)