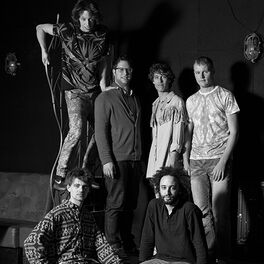 If you think Afrobeat, then you think... KOFFIE. The music of KOFFIE can be summarised as a mixture of Afrobeat, jazz and 1970s funk. "KOFFIE came about after Fela Kuti opened our ears", says drummer Otto van der Wotto. Fela’s full sound and wonderful grooves were the kick for these boys to dive into Afrobeat. The seven KOFFIE musicians recorded their first album in cooperation with vocalist Nassan Silva Lopes. When it came to the songwriting, KOFFIE was not only inspired by Afrobeat but also by Nassan Silvan Lopes who brought in many traditional rhythms and melodies from his native Guinea-Bissau (West Africa). The album named KOFFIE has been released in spring 2013. While the first album still reflected their development and growth, the second album Eh Lady (release autumn 2013) has them sounding all grown up. KOFFIE played many festivals, with highlights such as Oerol, Dunya and Roots Festival Amsterdam and shows in Belgium, Hungary and Switzerland. "Here stands a well-oiled machine who delivered a more up-tempo set than the preceding bands, along with more room for guitar- and keyboard-solos of a very high calibre." (3voor12 Amsterdam on the Fela Kuti Tribute, Paradiso, 15 October 2011) KOFFIE: Abe van der Woude - drums Valentijn Bannier - guitar Daniel Schotsborg - bass Itai Weissman - sax Alexander van Popta - keys Steven Brezet – percussion