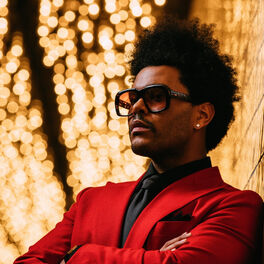 Beauty Behind The Madness

Making experimental, dark and introspective R&B, Canadian singer songwriter Abel Tesfaye was hailed as the future of urban pop while maintaining a persona shrouded in mystery. Raised by his Ethiopian grandmother in Scarborough, Ontario, Canada, he dropped out of school at 17 and started collaborating with producer Jeremy Rose, and posted a few of their early demos up on YouTube under the name The Weeknd. Rose left the project, but the tracks quickly created interest from among bloggers and critics and even won the approval of rap superstar Drake, who recruited him to appear on single Crew Love. Mixtapes House Of Balloons, Thursday and Echoes Of Silence further intensified interest before Trilogy (2012) compiled his recordings into a hit album that reached Number 4 in the US and was praised for its ambient, melancholic feel. A world away from the swagger of most of his peers, Tesfaye earned comparisons to Marvin Gaye, Prince, Curtis Mayfield and Frank Ocean for his chilling falsetto vocals and sonic ambition, but his shy personality and reluctance to do media interviews or promote his music created a mystique around him. Continuing to deal in slow, trippy tempos and atmospheric, heartbreaking soul, second album Kiss Land (2013) debuted at Number 2 in the US charts and confirmed Tesfaye's reputation as one of pop's most important new voices. Artist biography compiled by BDS/West 10. All rights reserved