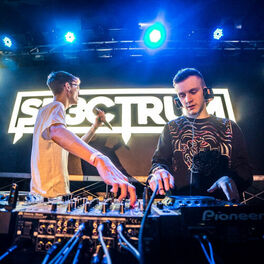 Don't Be So Shy

Rock to the Rhythm

EDM Hits by Up All Night

SP3CTRUM is a duo based in Parma, Italy, formed by Alberto Ferrarese and Riccardo Orlandini. Self Taught since 2015 they teamed up producing tracks for Bounce & Bass, Bourne Recordings which launched them officially, and hitting over 1.500.000 streams on their track Lights Remixing notorious artists like Will Sparks , New World Sound and Dimatik . Their unique club style along with the trending sound they evolved their sound signing multiple tracks on ChillYourMind to reach the world. Conquering the stages in Parma they're currently resident djs of Apocalypse Night, bringing some fresh new Club music and sharing the stage with important artists such as Valentino Khan , Tujamo , VINAI , Tigerlily , Salvatore Ganacci , Firebeatz and many many more. After an astonishing 2019 , with unexpected massive result on Deezer , they’re ready to constantly release in 2020 bringing in new style and big collaborations with well known artists. Connect with us! Info / Promo / Bookings contactsp3ctum@gmail.com