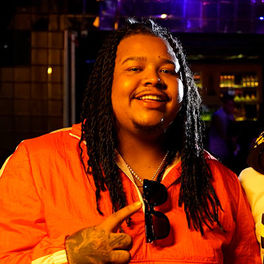 With a different and transparent proposal based on his experiences, Xantos presents the revolution of Rap and Reggaetón through an innovative musical approach that seeks to be the new trend in these genres. Américo Céspedes Santos, better known as "Xantos", is a 28-year-old Dominican rapper and composer born on February 7, 1989 in Hato Mayor del Rey. He is the son of Francisco Céspedes and Maria Santos. An explosive combination made up of his musical experience and writing skills has been the key to creating his own music without knowing that what he called "rhythmic outlets" would become a future in acclaimed success. As a young man he was always a lover of music. Rap held a special place for him, being influenced by artists such as Vico C, Eddie Dee and Tego Calderón. Their compositions inspired him to start in the world of music in 2006 alongside his old school friend, Marco Masis, internationally recognized as Tainy. His first album Revolucionario (2015) was edited by the record label of Juan & Nelson Entertainment. This production featured 11 songs consisting of urban rhythms layered with intelligently emotional and mischievous lyrics. The entire project was worked on by renowned producer Tainy, who has been awarded for his collaborations with stars Ricky Martin, Wisin & Yandel, Romeo Santos, amongst other industry greats. This album has been a great sales success, achieving a Double Platinum Disc in Spain. Xantos’ first promotional single, "Báilame Despacio", featured a music video that reached more than 92 million views on YouTube and more 100 million plays on streaming platforms. Years later, the song continues to play on the radio in several countries. So much so, that in 2017 a remix was recorded with both Piso 21 and Shadow Blow. The remixes reached almost 10 million views on YouTube in 3 months of being released. Xantos has a fanatic audience in Spain where he tours regularly. He has performed at the most prominent festivals of the country like Starlite Marbella, the Coca Cola Experience in Madrid, the Carnivals of Tenerife and many more. In Colombia, he has thrived in the Top 10 of the National Urban Chart and has visited the country on many occasions. 2017 was a great year for Xantos, with the success of his Jamaican influenced song "Uh La La" in Chile, Puerto Rico and Colombia. He also made commercial collaborations with international artists such as "La Consulta" alongside Bebe and Rasel, participated in the Panama Telethon and premiered the Trap song "La Calma", making a social critique on the passage of Hurricane Maria through Puerto Rico, forcing him to emigrate to the United States.