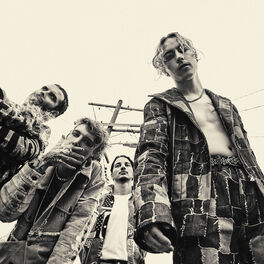 I'd Rather Die Than Let You In

Bring Me the Horizon

You Me At Six

Hailing from Watford, Herts, The Hunna – singer/guitarist Ryan Potter, lead guitarist Dan Dorney, bassist Junate Angin and drummer Jack Metcalfe – are four guys living the classic rock ‘n’ roll dream – one of touring, tattoos and tearing up the world’s most iconic venues, and they’ve already got to phenomenal levels of fandom as, largely, a word-of-mouth success story. The band are back in 2020 with a thrilling third album and a stonking great attitude that’s alluded to in the title: I’d Rather Die Than Let You In. It was recorded with crack producer John Feldmann, who has produced bands like Blink-182, Fever 333, Twenty One Pilots, Refused, Panic! At The Disco, Black Veil Brides & All Time Low. The band’s debut album 100 (their name, itself, is an extraction of the word “hundred”) came out in 2016, and hit No. 13 on the UK album chart. Things were happening fast, and the band was on the up: the venue capacities were increasing, the fanbase was growing exponentially. By the time they released second album Dare, they were able to fill Brixton Academy twice. “There’s no plan B for us,” says Ryan. “We won’t stop until we get to where we believe we can get to. We want to be one of the biggest bands in the world, up there with our favourites: Kings Of Leon, Foo Fighters, Nirvana, The 1975. Headlining arenas, stadiums one day. We want to experience everything.”