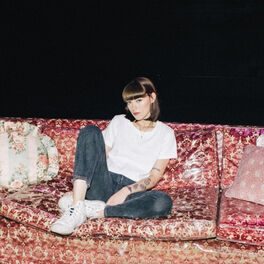 smiling when i die

at least i look cool

Dancing With Your Ghost

Alexandra Artourovna Yatchenko, who goes by the name Sasha Sloan, is an American indie pop singer-songwriter of Russian heritage. She learned to play the piano as a child in Boston and moved to Los Angeles in 2004 to pursue a musical career. She wrote songs for artists such as Idina Menzel, Deorro and John Legend and released her debut EP, 'Sad Girl', in 2018 followed by 'Loser' (2018) and 'Self Portrait' (2019). Tracks include 'Runaway' (2017), 'Hurt' (2018) and 'Smiling When I Die' (2019). Her 2020 schedule was to include appearances at venues in Vancouver, Canada, plus Portland, Seattle, Dallas, Phoenix, San Francisco and El Paso in America.