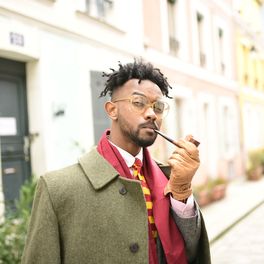 From his real name Elhadji Diallo, Elzo Jamdong was born in the center of Dakar, the district of Plateau. He grew up in a family of music lovers, including an amateur father of jazz and Cuban music and a brother keyboard player. Westcoast rap fan, he calls himself Free E (inspired by Eazy E) and writes his first steps in college in 4th grade. After his Bac, he moved to Lille in France in 2006 and formed the collective Jamdong with other student friends from Dakar with whom he produced two mixtapes (Red Alert in 2009 and Gold Medal in 2012). Multilingual (Wolof, French, English) and hyper versatile rap and singing, his particularity to kick his lyrics rap and sing with ease makes his first solo project (Free Dope, 2014) a turning point in Senegalese hip hop while "Free" is spending his last year of a Master in Commerce at the University of Poitiers. The excerpts of the tape turn into radio and club and the clips are immediately broadcast on TV. In 2015, he went on to tour with a free season EP and toured six regions of Senegal and twice filled the legendary Théâtre du Sorano National Theater in the center of Dakar (1100 seats) and the Comedy Club in Paris ( 200 seats). After two years of touring in Senegal and France, which allowed him to defend the Free Dope and Free Season projects, Elzo unveiled in May 2016 his first international album "Freengdom", a cocktail of energetic flows in Wolof mainly but sometimes also in English and French on hip-hop, afro and assiko sounds. This album earned him to appear on the compilation of the 20 years of "couleurs tropicales" , mythical radio show of the animator Claudy Siar on RFI and to appear on the soundtrack of the movie "La vie de château" in France. He also won the best video of 2017 at the Galsen hip hop awards rewarding the best rappers in Senegal. While defending his album Freengdom, Elzo has not failed to work on his upcoming releases. Thus, he will unveil his next project MACINA available in physical and digital format on June 22nd, 2018 with a Parisian release concert on June 29 at Le Zèbre de Belleville and a Senegalese tour that will take him to 14 regions of the country and other European dates to come in particular in Italy, Spain and France. www.elzojamdong.com