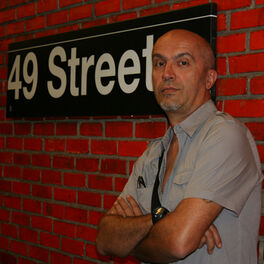 Rhythms Of The World

Black Mighty Wax (a.k.a. Cesare Cera) starts working in the music circuit in the late 70’s, playing as drummer and percussionist with various groups of the Italian funk-jazz scene. During the 80’s he works as radio dj broadening his music knowledge and becoming more and more passionate of 70’s funk-soul, jazz and disco spinning these sounds several nights in various clubs In the early 90’s with the explosion of house music Cesare Cera finds inspiration to start his first productions teaming up with Soundhands & Elise naming the group BE NOIR. With “Give me your love” released in 1991, Be Noir received very good response from dj’s in the US, UK or Japan doing well also in specialist charts worldwide. From those days he started to spin music in various clubs around the world falling in love with house music. Co-founder of the Irma Records during those days, working for the label like Int’l Label Manager and producer. He’s the mind behind several compilation series like Acid Jazz and Soul Classics, Jazz House Independents, Sister Bossa or Chill Out Cafè However Cesare Cera always goes back to his roots and original passion for melodies and real instruments and in 1999 he starts producing tracks for his debut album calling up musician fellows having in the recording studio The Black Mighty Orchestra. The title “To The Sky” indicates his spiritual attitude to life spacing out in need of freedom. 18 tracks that are fully intended to show his wide musical experiences from his early funk days, through his forays into house music and nu-jazz, right up to date with his poignant, human take on the disco and jazz sounds. One of the best seller artist album from Irma so far. In the latest 10 years while still working as label manager for Irma he produces some original tracks under the names of Black Mighty Wax, DJ Moses, South Park, The Unkempt, Dancefloor Sindacate. The sound of these productions is very much oriented towards funk/jazz, disco and house with electronic elements, use of samplers (he’s a DJ…) and real instruments (he’s a musician…). A Black Mighty Wax’s album called “We, The Family” was released at the end of 2012 featuring guests such as Sarah Jane Morris, Neffa, Gazzara, Black & Brown, LTJ and Ohm Guru. Black Mighty Wax is hosting the ‘Irma Nights’ in various clubs or exclusive places where he likes to propose productions from the label and what he likes more starting from early ’70 until today! A selection that ‘travels’ from nu-bossa to lounge, from funk-disco to house with electronic flavours! He has created a particular one live-djset where its grooves join to the vocal improvisations of Silvia Donati (guest vocalist with Band Favela, Clan Greco, Arcoiris, Belladonna and with him, too!) offering something unique! Since September 2009 is the Music Selector for Gru Radio (Turin), he host a radio-show at Fujiko 103 (Bologna), he’s spinning every week at Nu Lounge (Bologna)