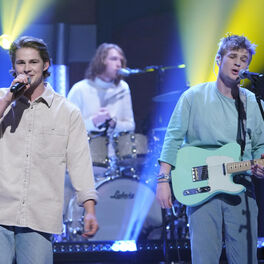 Where the Light Is

Heaven Falls / Fall on Me

Surfaces are an American pop duo from College Station, Texas comprised of singer-songwriters Colin Padalecki and Forrest Frank. The two musicians met online through social media platforms and Frank, who lived in Seattle at the time, invited Padalecki to record some tracks with him. They released their debut album, 'Surf', in 2017, which included the track 'Be Alright'. The song created a lot of interest in the duo's music, paving the way for their follow-up album 'Where the Light Is' which the band released in 2019. The lead single 'Sunday Best' and its accompanying video became a viral hit garnering over 26 million hits.

Having established a name for themselves and built a substantial online fan base the band released their third album 'Horizons' in early 2020.