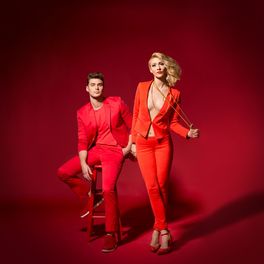 Stay Away from Me

All I Want for Christmas Is You

In the three years since Karmin’s Amy Heidemann and Nick Noonan signed to Epic Records, the duo has been on a wild ride. They have earned accolades from hip-hop heavy hitters The Roots’ Questlove, Diplo, Jermaine Dupree, and The Game, performed more than 600 live shows, racked up nearly a billion collective views of their eye-popping videos (fueled by the devotion of millions of loyal fans around the world, who call themselves “Karminites”), scored the double-platinum hit “Brokenhearted” off their 2012 EP Hello, and appeared on Saturday Night Live. Oh, and later that year, Amy was also featured on the cover of Rolling Stone. The only thing Karmin hasn’t done is release a proper full-length album — until now. On March 25th, the duo finally unleash their debut, Pulses, which details the journey these two Berklee College of Music graduates have been on since being pulled from their basement apartment in Boston and set on the tumultuous path to music stardom. “We were kind of in a honeymoon phase for a while, like, ‘Holy shit, that actually happened?’” Amy says of the events of the last few years. “Then real-life hit. Everything was great until things didn’t go exactly the way some people said they would. We were definitely brought back down to reality. And that inspired several songs on the album, like ‘Neon Love,’ ‘Drifter,’ ‘Tidal Wave,’ ‘Puppet,’ ‘What’s In It For Me,’ and the title track, ‘Pulses.’ Because after the honeymoon ended, the real work began. It’s been a lot of ups and downs, which we represent with the jagged up-and-down line symbol of a pulse on the album cover.” Despite the struggles they’ve endured, Karmin have emerged with a stylistically wide-ranging and truly artistic statement-making album that finds them presenting the most authentic version of who they are to date, thanks to clear-eyed, honest storytelling, sonic boundary-pushing, and expanded creative control with Amy and Nick serving as executive producers and Nick stepping up as both a lead vocalist and producer. “We have such a specific vision in mind,” Nick says. “I wanted to make sure that I was one of the people at the helm helping it translate.” Karmin’s desire to tell and ultimately own their story led to several of Pulses’ most lyrically edgy songs, like the ballad “Neon Love,” which they wrote with musician-producer Martin Johnson. Over epic piano and swelling programmed strings, Amy sings, “I never noticed how hot it is under these lights / This neon love is burning too bright.” “It’s actually about our perspective on our career,” she says. “This is all we wanted for so long, then you get here and you're still going to experience really negative stuff even if you achieve your wildest dreams.” Another ballad, “Tidal Wave,” is about the effect their busy lifestyle has had on the couple’s relationship. “My favorite lyric is, ‘We speak all day and never talk,’” Amy says. “We have a great working relationship, but there are times when we're working so hard that we realize, ‘Wow, I haven't actually connected with you in, I don't know how many days.’" But just because Karmin dive into emotional subject matter on Pulses doesn't mean the album is a downer. On the contrary, “Nights Like This” (which they wrote with their “Brokenhearted team” of Claude Kelly and Emily Wright) is “our drunk party song,” Nick says. Then there’s the “aggressive, thumping kiss-off ‘Acapella’” (as Rolling Stone described it) and the disco-tinged dancefloor filler “I Want It All,” which retain Karmin’s signature colorful sound. They also manage to show how much the duo’s wholly original blend of hip-hop, pop, and rock has evolved musically. “’Hello was such a great jumping off point for us, but we definitely grabbed the reins on this one and pulled them closer in our direction,” Amy says. “We were ready to make a new sound where you’re like, ‘Nothing else sounds like this.’ I think Lorde, Macklemore, and Goyte have proven that artsy, original music can be accepted by the mainstream and millions of people can love you for being unique. We wanted to find out what made us unique without too many people talking in our ear.” To achieve what Nick calls their “left-of-center, hip-hop-influenced pop-rock sound,” the duo called in veteran songwriters Claude Kelly and Ester Dean, newcomers like The-Elev3n, Dre Skull, and Ryan Williamson, as well as Martin Johnson, 3Oh!3, and Jon Jon Traxx, with whom they co-wrote “Drifter” and “Pulses.” “’Pulses’ was the one of the first tracks we came up with where we were like, ‘Wow, this is new and different, yet it feels like us," Nick says. “It had that really big feel to it that we knew would really translate live.” “Our live show is of the utmost importance to us because we feel so confident going out and performing the music,” Amy says. Karmin kicked off 2014 with their #Pulses headlining tour, which has earned them stellar reviews. "It doesn't hurt that Heidemann has a set of pipes that can rival Warped Tour-era Katy Perry, with the energy of Paramore's Hayley Williams and looks that could kill,” raved Houston Press. “And of course, she can rap her ass off." “Live, we’re more of a rock band,” Nick says. “It’s great to have a pop hit, but it immediately puts you in a super pop box and we’re not that at all. It's much deeper than that. Then people come to shows and they're like, ‘Oh shit, Karmin's legit, man!’” “We are so proud of the show,” Amy adds. “It's an emotional and energetic roller coaster, like the album is. It's not choreography and confetti, but raw energy and musicianship.”