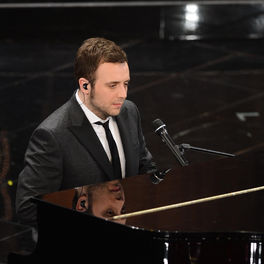 Love Outside the Window

All I See Is You (Original Soundtrack Album)

Born in Urbino, Raphael Gualazzi has grown up in a sumptuous area. He says about his birthplace, “it’s a place drenched with history, a UNESCO Word Heritage site and homeland of many great creators as the painter Raphael. It’s a remote place but very inspiring. Even though I’m living in London now, I love to come back here” says the musician. This is where he started learning the piano at the age of nine. He entered the Music School of Pesaro five years later, and played the piano. He studied the classical composers for eight years. In 1995, Raphael Gualazzi discovered jazz thanks to a friend of his father (himself a drummer in a pop band) and a whole new world opened to his ears. He dived into ragtime and 1900’s stride, and started exploring the music of Scott Joplin, Jelly Roll Morton, Fats Waller, Art Tatum and Mary Lou Williams. Later, he discovered Duke Ellington, Django Reinhardt and Ray Charles. Despite singing in a choir, Raphael Gualazzi decided to focus on playing keyboards. “I love old jazz, he says. It was popular and people danced to it. By today’s standards, it’s become a bit intellectual, but through my feelings, I’m drawn to this more communicative form of expression.” At the beginning of this new century, Raphael Gualazzi appeared in many festivals. In 2005, he recorded his first album, “Love Outside The Window”, and featured alongside Jamie Callum and Diane Krall on the compilation “Piano Jazz” (for which he recorded “Georgia On My Mind”), two years later. Following this, Raphael Gualazzi was invited to come to Vermont and New Hampshire to be part of the project “The History & Mystery Of Jazz” with American jazzmen Michael Ray and Steve Ferraris. In 2009, he signed with Sugar Music (through Caterina Caselli). He then played at the Blue Note Club in Milan and started to write new material. He finally gained worldwide exposure when Gilles Peterson remixed the track “Reality And Fantasy”. The album (named after the song) followed quickly and since then Raphael Gualazzi has been exposed to massive worldwide audiences. People have fallen in love with his way of making music; without computers but with real melodies played by real people. With “Happy Mistake”, the very much talented and quite unique Raphael Gualazzi is about to write a new chapter of his own book. Be ready to read.