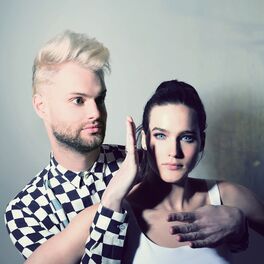 DANCING ON THE PEOPLE

To All The Boys: P.S. I Still Love You (Music From The Netflix Film)

The New Pope (Original Soundtrack from the HBO Series)

Born in Germany, singer-guitarist Sophie Hawley-Weld moved to Atlanta, Georgia at the age of four and had a well travelled childhood which included living in Canada, Italy and Brazil where she discovered boss nova music and learned Portuguese in order to understand the lyrics of artists such as Jaoa Gilbert and Sergio Mendes. Growing up in Boston, Massachusetts, Tucker Halpern was an NCAA basketball star who was heading for the NBA until he was struck down with a debilitating illness. Bed-ridden for eight months he was forced to give up his dream of the NBA and with the help of YouTube tutorials and a love of 1990s electronica he began making his own beats and samples on his laptop and returned to Brown University in Providence, Rhode Island to complete his studies and kickstart a music career.

Both Halpern and Hawley-Weld were in their final year when they met at an art gallery where Hawley-Weld was performing with an acoustic trio and Halpern was DJ-ing; when he attempted to liven up her songs by laying down electronic beats, they formed an unlikely connection. They started recording together the next day and, on graduation, moved to New York, where they used the Chinatown studio of fellow electro duo The Knocks to make demos and began landing support gigs around the city. When Hawley-Weld began singing lyrics in Portuguese from a poem by Brazilian writer Chacal and Halpern applied a throbbing, hypnotic, deep house pulse underneath a primitive guitar riff, they discovered a trademark sound and had their breakthrough track 'Drinkee'. The track ended up on an advertising campaign for the Apple Watch in 2015 before featuring on the duo's first EP 'Soft Animals' the following year. They quickly built a following by touring with bands such as M83, Odesza and Grimes. Apple then also used their track 'Best Friend' in a campaign for the iPhone X which became a platinum-selling hit, before they filled their 2018 debut album 'Treehouse' with a shimmering patchwork of Latin-electro beats, dancefloor euphoria and globetrotting, carnival vibes.