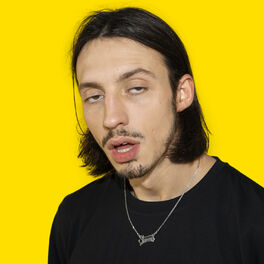 Rapper Roméo Elvis was born in the Belgian town of Uccle in 1992 and was raised in a family who were well versed in the performing arts - his mother was the comedian Laurence Bibot and his father was pop singer Serge van Laeken, better known as Marka.

The rapper's birth name is Roméo Johnny Elvis Kiki van Laeken and after initially studying to be a photo journalist he decided to abbreviate his name and concentrate on building a career in music. During the early stages of his career van Laeken supported himself by working as a cashier in the supermarket chain Carrefour and it wasn't until the release of his album 'Bruxelles Arrive' in 2017 that he quit his job to concentrate on building a full-time career in music.

Since becoming a rapper he has been closely associated with members of the Belgian group L'Or du Commun and also with the band Le Motel with whom he has achieved significant chart success. The album 'Morale 2' (2017) was a collaboration between van Laeken and Le Motel which reached number three in the Belgian charts and was certified platinum. The artist has also featured on two chart-topping singles, 'Hit Sale' released in 2017 with Therapie Taxi and 'Tout Oublier' released in 2018 with his sister Angèle. 2019 saw the release of the album 'Chocolat', comprising the singles 'Malade' and 'Normal'.