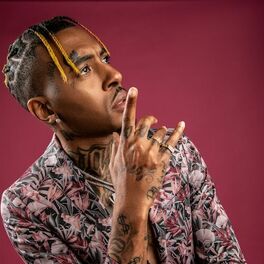 Fashion-forward, high art-inspired outlier Coca Vango infuses sweeping melody and palpable emotion into the unpredictable and undeniable hip-hop hinted at by his very name. Heavily influenced by Maroon 5, Pharrell, and Paramore, his high-pitched delivery added another dimension to thick trap-style beats and modern production. He grew an organic buzz on his own. Datpiff showed support early as his 2016 mixtape Jugg Rich 2 spawned a viral hit in the form of “Recipe.” OVO Radio spun the track and tastemakers like YesJulz touted it online. The follow-up Van Gogh boasted a reinterpretation of “A Starry Night” on the cover and guest spots from Bobby Creekwater, Caskey, and more. Along the way, iconic producers such as Polow Da Don and Jazze Pha became mentors. NBA Champion JaVale McGee teamed up with him for “Understand.” The Source sang his praises, while Complex dubbed him “Bout to Blow.” In 2017 he began sharing “Motivational” videos on Instagram. The clips viral clips served as the basis for his breakthrough independent 2018 project, Motivational Purposes Only. He kicks off the next chapter with the hypnotic and high-energy single “Show Em.”