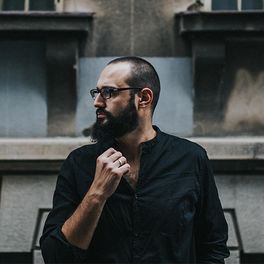 Marko Stojanović Louis was born in 1985 in Munich Germany. He is the son of a famous Serbian singer and musician Ljubiša Stojanović Louis. He graduated Percussion in the Munich Music Conservatory and Recording and Sound Design in Belgrade Faculty of Dramatic Arts. He was a member of a soul band MaraQya with whom he released two studio albums. He released his debut solo album “Shine On Me“ in May 2015 with all the lyrics exclusively in English. The album was a sales success and helped establish Marko as a solo artist. In April 2017 Marko released his second studio album “Beskraj“. The album was released by Lampshade Media and gained even more attention than the debut. The album represents a unique mixture of contemporary soul and world music with a touch of pop, Jazz, Funk and Reggae. The purpose of the release, according to Marko himself, is to break the genre boundaries. Therefore, Marko named the album “Beskraj“ (Serbian for infinity). The album hosts global guests such as Vasil Hadžimanov (Serbia), Vlatko Stefanovski (Macedonia), Bobo (Bulgaria), Adnan Šaran (Bosnia and Herzegovina), Božo Vrećo (Bosnia and Herzegovina), Tanu Saxena (India) and Layth SidiQ (Armenia, USA)- to name a few. During the “Beskraj” tour, Marko sold out concerts and played to packed houses at numerous festivals all over the Balkan region. Marko’s new live album “Uživo DOB 2017” was recorded over the holidays in late December 2017 at the legendary Belgrade venue Dom Omladine.