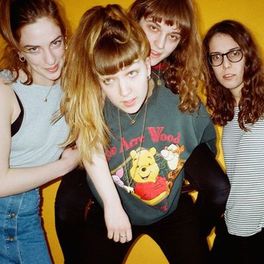 Love In The 4th Dimension

Carol Of The Bells

It’s The Most Wonderful Time Of The Year

Fighting With My Family (The Original Soundtrack)

Women To The Front

Girls To The Front

It has been an exciting introductory year for Juliette, Fern, Soph and Celia of The Big Moon. Releasing their first recordings to widespread acclaim in 2015, the band have been busy selling out their shows across the UK, and performing to expansive audiences on high-profile support tours with the likes of The Vaccines, Ezra Furman and their new label mates The Maccabees. The band return this Spring with another bullet of a track that heightens their already sky-high appeal. Cupid is everything that The Big Moon have already promised and more. A track full of punch, verve and a knowing swagger, capped by vocalist Juliette Jackson’s wry snarl of a delivery, and her bandmates pin-sharp harmonies. It’s a smart and confident next step forward.