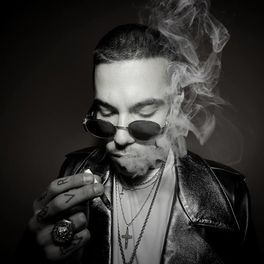 Top Hits - November 2016, a playlist by Playlist A

Gionata Boschetti, better known as the Italian rapper Sfera Ebbasta, dropped out of school early and spent his time working on music with his friend and collaborator, producer Charlie Charles. He was seen as an emerging talent in Italy in 2013, forming Billion Headz Money Gang (BHMG) which sold music and merchandise.

Their first release was the album XDVR (2015). This was originally released as a free download but later released commercially with extra tracks and was popular with the underground music scene in Italy.

Ebbasta rose to prominence in 2016 with the release of his self-titled debut album, 'Sfera Ebbasta'. It reached number one in the Italian Album Charts and hit double platinum sales as did several singles from the album. The album departed from the gangster themes in XDVR and took on a broader spectrum of issues. He promoted the album with a tour throughout Italy.

2018 saw the release of his third studio album 'Rockstar' which was again produced by Charlie Charles. The album was released in Italian and international versions, the latter including collaborations with artists such as 'Tinie Tempah' and 'Quavo'. It went straight to number one in the Italian Album Chart, and at the same time, all eleven tracks from the album made it to the top 12 of the Italian Singles Chart.

The 2019 single 'Mademoiselle' reached number two in the Italian Singles Chart. He also featured on 'Mon Cheri' with Rkomi which went in at number six in the same chart.