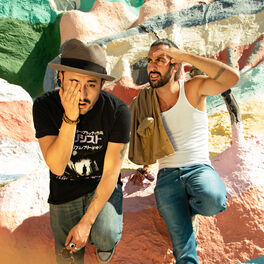 Woke Up In London

Migrant Motel began in 2017 when Peruvian/American David Stewart Jr and Mexican born Chava Illizaliturri met at Berklee College of Music. They immediately began creating and gigging the North Eastern scene, culminating in the release of their first album “Volume One” where they found their first hit “New Religion” that has gathered over 1 million streams on Spotify. They wrapped up that year by moving to LA and opening up for Cafe Tacvba in Boston’s House of Blues. During their LA stint, the duo conquered legendary venues like the Viper Room, Whiskey A Go Go, Rainbow Room, The Troubadour, and the like. It’s during this time that the band participated in the Next2Rock Battle of the Bands presented by KLOS 95.5, being chosen as the best indie rock band of LA. In 2018, Chava returns to Mexico City as the band’s operations switched online. Since then, Migrant Motel has continued to thrive in both territories. Singles like “Keep It Down”, “Different Kind of Leather”, and their latest “I Don’t Wanna Know” were received as far south as Colombia, allowing Shock Magazine to help them collaborate with Latin Grammy Nominated Soy Emilia on a spanglish remix. Even though 2020’s unprecedented times changes the band’s plans, Migrant Motel did not let up. The alt rock dup launched their “60 Second Songs” campaign that focused on new original material on a weekly basis. This caught the attention of Fringe Music/Angry Mob Music who signed the band with major sync deals in mind. In 2021, Migrant Motel is loaded with 2 EP’s worth of brand new bilingual alt rock, and a plan to expand their stronghold on both anglo and latin territories.