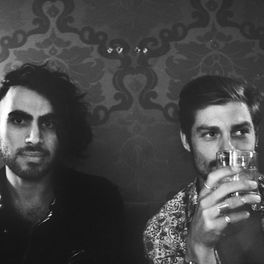 Clap Your Hands (The Remixes)

Child of the Moon

In the head of... Romain Costa

Some things are just meant to be. Whilk & Misky, for example. Nima and Charlie, to use their real names, met in November 2012. Within three months, they were living together, making music and tearing up the blogosphere with their first ever production, ‘Wing Clipper’. They’ve pursued a near-vertical upwards trajectory ever since, chased by major labels before they’d even played a gig. In short, it’s been a whirlwind. The attraction is clear. Whilk & Misky’s music fuses Nima’s brooding electronics with Charlie’s pinwheeling guitar and throaty vocals. The result is something you’ve never heard before, something from the previously uncharted interface of techno, folk, electronica and the blues. ‘Wing Clipper’ sees Charlie lamenting a broken heart over a techno pulse and mournful piano, while ‘Darklands’ folds some manic organ breakdowns and reverb-drenched guitar chords into the mix. Nima explains how they chanced upon this unique sound. “I’m into soulless, really cold sounds and he is into really soulful lyrics, really tortured,” he says. “It’s the meeting of those two things.” Back to the start. Charlie grew up in Kent, obsessed with Bob Dylan and Chuck Berry. Nima was born in Iran, moved to Dubai as a teenager, where he was the only goth in town, before falling in love with avant garde electronica. They met in London. Charlie was working in a Shoreditch diner. On his first night, Nima came in with his old band. Sultry looks were exchanged between Charlie and the singer, who invited him to their gig the following night. He was late, missed the performance and found out she was married. So he went drinking with Nima instead. It was the start of a great friendship. A couple of months later, when Nima needed a new flatmate, Charlie moved in. “We shared this one bed flat on Hoxton Street” explains Charlie. “We’d have alternate weeks between the bed or sofa… unless you got lucky.” Nima continues: “Yeah, we had the studio set up around the living room-come-bedroom and would record whenever we weren’t working and partying. You’d trip over a cable to fall into your bed on the sofa.” In April last year, they wrote ’Wing Clipper’, the product of a jam session. They sent it to some music blogs, just for the hell of it with numerous sites posting it with flattering reviews and keen interest for more. When ‘Darklands’, got the same reaction a month later, they decided to focus exclusively on making music together. It just felt right.  “Not long after that the industry big wigs picked up on it and started contacting us,” says Charlie. “They wanted know who we were, our plans and where we’d be playing next. We hadn’t even played a gig at this point, all we had was the demos for ‘Wing Clipper’ and ‘Darklands’ on our Soundcloud page. We didn’t even really consider ourselves a band. We’d just made music we liked together.” An intense summer of hedonism and music making followed, crowned by a rite of passage tour to Berlin, where the two tested their live set on a welcoming German crowd; Nima also found his spiritual home at the legendary Berghain nightclub. Following the success of their debut EP ‘The First Sip’, released on their own Dirty Charm imprint, the boys plan to release a debut album in 2015. They’ve already written over 20 tracks. The aim is to craft a record that means something, that resonates with people’s lives. “I respect people like Alex Turner because of his social commentary,” says Charlie. “That’s what I’m trying to do with Whilk & Misky: tell stories.” Electronic music that engages your head as well as your feet. Now that really is something. For Whilk and Misky, the story has only just begun. But what a first chapter.