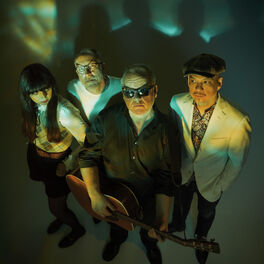 Beneath the Eyrie (Deluxe)

Beneath the Eyrie Demos, Pt. 2

Live from The Fallout Shelter

Wave Of Mutilation: Best Of Pixies

Death To The Pixies

Queens of the Stone Age

Best Rock of All Time

Bono - 60 Songs That Saved My Life

To make you smile again with Soko

Beloved and enigmatic, influential and proudly difficult to categorize, the Pixies made a triumphant return in 2004 following an eleven-year hiatus. The celebrated band wowed both fans and critics at performances around the world and continued for seven years. For all those years, fans clamored for more and it remained uncertain as to whether or not the Pixies would ever record again. Until now. Drummer David Lovering explains the events leading up to writing new music. “We’ve been talking about this for years and years… ever since 2004. From 2004 to 2011 we were touring, which was a longer time than we’d been a band initially – and that amazed us – but except for the one track (“Bam Thwok”), we didn’t have anything new. We didn’t want to turn into a casino act. So we started putting it together.” It was important for the band to continue moving forward. As singer/songwriter Black Francis points out, “We did a reunion tour and the tour went much longer than we anticipated. We wanted to compete on a real playing field again. You get hungry, you want to be judged: we wanted to be vital.” The singer also admits that the Pixies’ return to making new music was not without obstacles. “There was some fear and trepidation because we were hoping to do that recording session with the original foursome of the band. Suddenly that was not going to be the case and it was pretty devastating; not necessarily unexpected but very unwanted. Joey, David and I didn’t really know what to do: we were a little bit shell shocked that as much as we wanted it, it wasn’t going to happen. But we came back and met and everyone believed in the music. We would rather forge ahead and see what this turns into rather than just retiring the whole thing.” Guitarist Joey Santiago was effusive. “I wanted this to happen. I love to play music and I love this band. This time around there’s more appreciation, more gratitude.” Lovering was cautious at first. “Putting out new music after so long is kind of a double-edged sword. I know a lot of people asked for it; and I know bands that have gotten together after a long time and done albums and I’m really not a fan of it but overall I’m very confident about the music. It turned out really well and it was a lot of fun and basically that’s good to me because I had a great time doing it.” In October 2012, the Pixies convened to Rockfield Studios in Wales with longtime producer Gil Norton (who did Doolittle, Bossa Nova and Trompe Le Monde). As Lovering recalls, “We had (five) songs going in to the studio and we wrote (another seven) there. We’d never done that before, and some great songs came out of it, in fact. It worked out pretty darned well.” The band recorded with Norton in secret. “It didn’t really serve any purpose to make it public,” says Black Francis. “But there are very few mysteries anymore with the internet and the feeling was we should try to keep this just part of our lives and not have it up for grabs. Gil was very excited. He’s produced us more than any artist he’s worked with. We’re friends and everybody liked what he did in the past. We don’t always agree with him – we don’t – but we respect him. He pushes us out of our comfort zone.” With Norton pushing the Pixies out of its comfort zone, the band emerged with a cache of new songs, including “Bagboy,” offered as a free download on June 28, and its companion video that had some one-million YouTube hits in its first week. In addition, EP1 - “Andro Queen,” “Another Toe in the Ocean,” Indie Cindy,” and “What Goes Boom,” the Pixies first collection of new music since 1991’s Trompe le Monde, is released on September 3, 2013. The Pixies will tour extensively and is anxious to get back out on the road and premiere the new material, especially Santiago. “It will be interesting to see the audience reaction when we play the new stuff. I always think of iconic bands that come out with new material and everyone files out for a liquid break. They’re either emptying out liquids or getting more liquids. So for sure the new material will be strategically placed in the set. We’ve been rehearsing and the songs sound just great. I can’t wait to play the new stuff live.” How will fans react to the new music? Santiago remains confident. “The great thing about this music and these songs is that, when I step back and listen to it, it sounds like the Pixies. It’s the way we walk. We’re lucky to have that.” Black Francis sums it up: “I just want to make music. We love connecting with people and we want people to feel really happy about this musical experience we’ve all embarked upon. At the end of the day we’re making fuckin’ rock n’roll records. We’re not trying to save the world!”