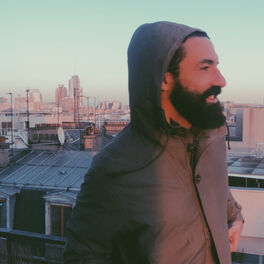 What's New on Because?

End of the World Remixes

iZem (the acronym of “in ze early morning”) is the alter ego of the French-born music producer Jérémie Moussaid Kerouanton. He has been relentlessly exploring new horizons, in a constant search for links between cultures through music and technology. He has been producing and deejaying under the name iZem from every corner of the globe for the last 10 years, and his efforts to travel off the beaten track have long been supported by some of the greatest tastemakers, including Gilles Peterson, Bonobo, Mount Kimbie, Lefto, Quantic or Branko… After spending several years in various locations around the globe he finally settled in Lisbon in 2013, a cosmopolitan and sun-filled port city, with the idea of putting the finishing touches on his first album "Hafa", released on Soundway Records in 2016. The last couple of years have seen him debuting his live performance both with a full band and as a solo electronic act. He also collaborated with artists such as Brazilian legend Elza Soares, Cape-Verdean global stars Mayra Andrade and Sara Tavares as well as French beatmaker Guts. In 2018 he released an EP on the Lisbon-based Enchufada label and a single on Heavenly Sweetness. Injecting percussive and syncopated beats into jazz and hip-hop aesthetics , iZem has established himself as a unique and vital voice in the global club music scene.