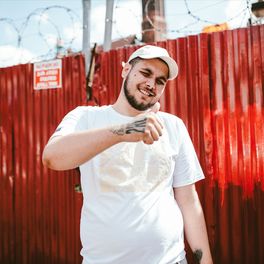 Where Have You Been?

A Bite to Eat EP

par Jaykae, Dapz on the Map

Hell to the Liars

Made In The UK

par Jaykae and Dapz On The Map

From My Sleeve To The World

Nothing Great About Britain

Jaykae is a rapper from Small Heath in Birmingham, UK. He is of Afghan, Pakistani, Egyptian and English descent. He first started performing in 2009 with Birmingham's Invasion Alert.

His early independent releases included the 'A Bite to Eat' EP in 2013 and the 'Froggy' EP in 2014. He achieved greater recognition with the 2017 powerful single 'Toothache' in 2017, which was used in the US TV drama series 'Power'.

On the back of that success he made a guest appearance at a Stormzy gig and released his debut LP, 'Where Have you Been?' produced by fellow rapper Skepta in 2017. That year he also became involved in a Twitter dispute with the far-right activist Tommy Robinson.

He produced the tracks 'CCTV' and 'Boys Will Be Boys' for The Streets and has supported The Streets in their concerts. In 2019 he released the single 'On the Way Home' with Aitch, featuring Bowzer Boss.