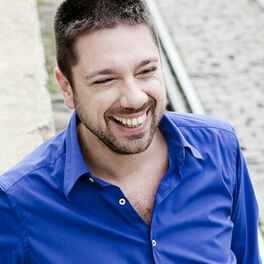 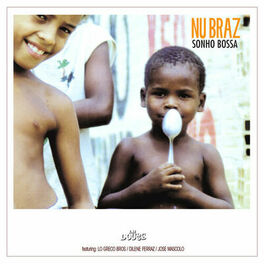 Nu Braz is the music project founded by singer/musician/DJ Emmanuele Cucchi, son of trombone player Franco Cucchi, member of the Riverside Jazz Band, and singer Anna D’Amico, who played a main role on the Italian music scene in the 60’s. Emmanuele has been a professional singer since the age of 5, when he started to record children songs. He has also played various leading roles in theatre and is the artistic director of 3 music clubs in Milan - Roïalto, Milano, InnVilllà - and 2 restaurants in São Paulo - the famous Brasil a Gosto, owned by his good friend Ana Luiza Trajano, and L’Amitié, run by internationally known French chef Yann Corderon. During the years he’s also been working with famous Italian fashion stylists like Armani, Rocco Barocco, Lorenzo Riva, Ferragamo and many more. His love for Brazilian music in all its forms has been constantly growing throughout his long career until, thanks to the help of Maestro Jose Mascolo - who already worked with his father Franco in the Riverside Jazz Band and with his mother Anna in many concerts - Emmanuele decided to become part of the beloved Green and Gold world.Following the success of his debut album ‘SONHO BOSSA’, project based the fusion between Brazilian music, electronic grooves and Italian melodies from the fifties, Nu Braz decided to make a big step forward and found new important collaborators for the realization of his second work. ‘BATICUMBUM’ was recorded in Milan, São Paulo, Paris and Rio De Janeiro, blending in its grooves the different cultural influences. While in Milan top musicians like SOULSTANCE, Giacomo Tringali, Jose Mascolo, Marco Brioschi, all members of the original Nu Braz backing band, were involved. S-TONE Inc. together with TOCO (singer and author for Rosalia De Souza and Roberto Menescal) wrote and arranged a wonderful Baião song (typically from the Pernambuco region).Rinaldo Donati and his guitar created the perfect atmosphere for a cover of the great Fagner and Belchior penned song MUCURIPE. In Paris the violin parts were recorded together with Ricardo Herz from Brazilian group ORQUESTRA DO FUBÁ. In Brazil Emmanuele worked in his own Nu Braz Estúdio in Rio with RICARDO JANOTTO, LUCIO K, JESSÉ SADOC and recorded a duet with singer JAIR OLIVEIRA, son of the great Jair Rodrigues. When the album was practically finished he recorded another marvellous song with producer and friend Kassin, with the participation of DONATINHO, son of bossanova icon João Donato, on Rhodes. After this session Emmanuele was invited by Kassin and Berna Cespas to perform some songs from the album at the pre-carnival baìle ‘ORQUESTRA IMPERIAL NO CIRCO VOADOR’ (Rio De Janeiro, 2nd Feb 2010). Duda Mello, nominated twice for the Grammies, took care of the final mixing of the record, helping Nu Braz to emphasize the variety of the songs arrangements on the album, to represent the wide spectrum of Brazilian music styles. The mastering of ‘BATICUMBUM’ was done at the Magic Master studio in Rio by Grammy Award winner RICARDO GARCIA. BATICUMBUM, was successfully launched worldwide by Irma Records, now Celebrates the involvement of Dubas Música, with distribution throughout the Brazilian territory through Universal Music. The histrionic Nu Braz embarks on a new musical-culinary challenge Creating together with his wife Zaruty, (an award-winning Brazilian Blogger), the SAMBACOOKING project, that has recently become part of the most important food network in the world, the American Tastemade. SAMBACOOKING, which reinforces the important connection with Irma Records, puts to light the best of both countries so loved by Emmanuele, merging into a musical/culinary sound path this crazy travelling soul, which is so much 'Carioca' as 'Milanese' at the same time.