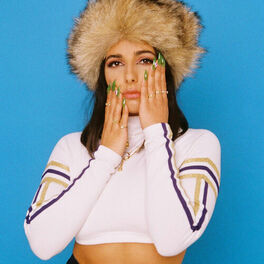 Her multicultural origins, love for flamenco, music with essence and especially the ease to create catchy melodies are qualities that guarantee great songs in the coming years. Vega Almohalla (whose last name in Arabic means "war camp" or "war people") made her debut in 2018 when she was only 20 years old, collaborating with Zazo & Gxurmet for their first song. They won a talent contest searching for promising new bands and were signed by Mushroom Pillow. The singles “Te Miro" and "Paris" are included in the Netflix’s series "Elite" and became a viral hit, entering Shazam´s Top 200 World chart with highlights in Switzerland, Germany, France, Spain, Mexico, Italy or Belgium. The two tracks also featured on different Spotify Viral Top 50 playlists in countries such as France, Germany, Italy, Chile, Colombia, Mexico and Spain, and entering sales charts in many more countries. After several concerts and a collaboration with Zazo & Gxurmet and the Colombian Papa Kumbé, Vega will start her solo career while she is also combining her skills as a theatre actress in Madrid. She will make her solo debut on the17th of January 2020 with the single "En el aire".