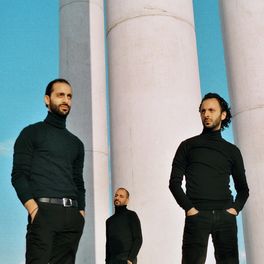 Rough Guide to the Music of Palestine

Three brothers, three ouds. Samir, Wissam and Adnan. On stage and in the studio, their instruments come together like three soloists who form one single voice. The oud, or Arabic lute, has become the voice of their souls, the beating heart of their existence with which they have become one. Always three, together. In their compositions, each one contributes without ever overshadowing the other two. For them, music only has meaning as a trio. With the Trio Joubran, virtuosity does not give into demonstration. For these natives of Nazareth who come from a long line of luthiers, it is about the perpetuation of a tradition. A tradition they have also deeply renewed by their innovation on the oud, this solo instrument which they have so wonderfully united as an ensemble. Since 2002, their reputation has continued to grow: from the Olympia in Paris to Carnegie Hall in New York to the United Nations, they have played to sold-out crowds. Accompanied on stage by compatriot and percussionist Youssef Hbeisch, their compositions leave room for their exceptional improvisational talent, and all it takes is just a glance toward the other two for their three voices to quickly become one. The Trio Joubran also celebrate their country by setting the words of celebrated poet Mahmoud Darwich to music (À l’Ombre des mots/In the Shadow of Words). Because this is as much about music as it is about Palestine. Listening to the Trio Joubran is plunging into the soul of a people. Egypt had Oum Kalthoum. Lebanon has Fayrouz. Palestine now has the Trio Joubran.