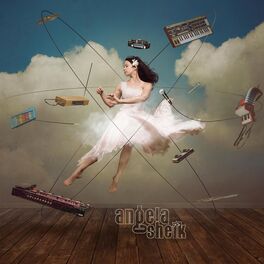 Songs From the Red Box

Stand By Your Man

Drive Until I Find The Sun

I Hope You Have a Horrible Christmas

Angela Sheik is an indie electro-pop singer, songwriter, music producer, and performer who has been featured on NPR, PRI, BMI Indie Spotlight, and Voice of the Nation. Her music has received praise on various music blogs including Pancakes & Whiskey, Vents, and Indie Music Digest (nominated 'Album of the Year'). Titled "National Loop Champion" by BOSS/Roland for her work with digital loop stations, Sheik has competed internationally and given BOSS product demonstrations across the US. During her time in the Philadelphia area she was twice voted Artist of the Year (93.7 WSTW Hometown Heroes). Angela loves working to a brief. She is known to write, record, produce, and mix a new musical work in a single day (hear an example of a song created in <48 hours in this Toyota commercial: bit.ly/Sheik_Toyota). Her music can be heard in advertisements, feature films, documentaries, and television including Showtime's Shameless, The Voice of Finland, UK's Extreme Hair Wars, and Portugal's Vidas Opostas. A former middle school band and orchestra teacher, her arrangements are full of percussive ear candy and fun surprises. As a live act, Sheik wows audiences with her fearless creative experimentation, live looping skills, mischievous smile, and self-generated swirl of rhythmic harmonies. She's toured the U.S. and Europe and opened for acts such as The Neon Trees, Julia Holter, Joseph Arthur, Midge Ure (Ultravox). She once received a standing ovation while opening for renowned bassist and pop singer Meshell Ndegeocello, a career highlight. A western New Yorker by birth and east coaster at heart, Angela currently resides in Los Angeles.