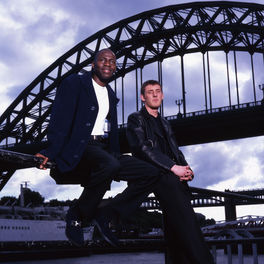 Blue Sky In Your Head

Whatever Gets You Through The Day

HITS OF THE 90s by uDiscover

Tunde Baiyewu and Paul Tucker were both working in bars in Newcastle when they first met and discovered common ground that resulted in them writing the distinctively smooth and soulful pop songs which became hugely popular through the 1990s. The musical chemistry between Baiyewu - who was born in London but raised in Nigeria - and Tucker (who'd graduated from Newcastle University with a first class honours degree in French and German), was natural and unforced, yet tapped into an unusually commercial sound. Lighthouse Family were discovered by Keith Armstrong and Phil Mitchell, founders of famous Newcastle indie label Kitchenware, and released their first album Ocean Drive in 1994. It also included their most famous song Lifted (Mrs Robinson), although it was only when it was reissued as a single in 1996 that the song broke into the UK Top 5 and established Lighthouse Family as a major force. On the back of its success and constant radio play, sales of Ocean Drive and its follow-up Postcards From Heaven rocketed. Third album Whatever Gets You Through The Day (2001) fared less well and Baiyewu and Tucker effectively stopped working together in 2004.