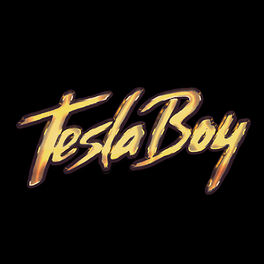 The Universe Made of Darkness (Night Version)

The Universe Made of Darkness

Tesla Boy is a Russian independent electropop (synthpop) band, which performs songs in English language. It was created by Anton Sevidov in August 2008. The band consists of four members – Anton Sevidov, Leonid Zatagin, Mikhail Studnitsyn and Stanislav Astakhov. The critics claim that the band’s music refers to the period of 80s revival, which gained traction in the end of the first decade of the 21st century. Lookatme.ru named Tesla Boy the best Russian band of 2009. Radio MAXIMUM named it “The breakthrough of 2009th among Russian artists”. It has twice become the best Russian band according to LookAtMe (повтор мысли). Tesla Boy Band is a regular guest of covers and spreads of many glossy American magazines, such as Interview, InStyle, Rolling Stone and famous Russian magazines, among which are Afisha and Sobaka. Tesla Boy is one of the most successful Russian music projects. The band has become the symbol of new Russian generation, who had listened only western music until Tesla Boy had appeared. No one could have imagined that the Band from Russia would appear on the pages of the British “Q” magazine, in the ipods of American Lady Gaga’s sound-producer Martin Kierzenbaum and actor Jared Leto or would be published by cult French label Kitsune. Tesla Boy is the only modern Russian band, which has a really impressive schedule of foreign tours. The amount of application for Tesla Boy’s concerts abroad has long acceded the band’s physical capacity. The previous season Tesla Boy were working on a second full-length plate “The Universe Made of Darkness”. This work in soloists’ opinion is more personal than the debut album. Martin Dubka, one of the best English sound-producers, who worked with Ali Love, Cazals, Aeroplane and Tyson, also worked on “The Universe Made of Darkness” Album. The first single from the new album of Tesla Boy has already been broadcasted and has settled down in the spring play-lists of the most popular DJs. The single “1991” revives the spirit of secret rave-parties, which were so popular in the end of the previous century. The second single “M.C.H.T.E” was solemnly presented on Noisey. The second album “The Universe Made of Darkness” was presented in Gorky Park in Moscow on May 25th 2013. There were more than twelve thousand people on the presentation. All music and lyrics is created by the members of the Band; all the concept, format and sound decisions are made by the members of the Band. For this very moment Tesla Boy is an absolutely independent project.