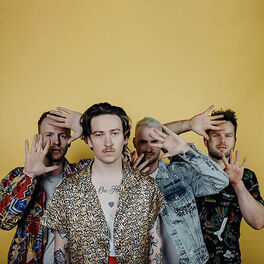 If I Build A Home On The Moon

If You Wanna Be Loved (Remixes)

Matin Rock (Thirty Seconds to Mars, U2, The Killers..)

Every band dreams of making a huge impact with its first album. Picture This did just that -- with results even greater than the Irish band's own aspirations. The group's self-titled 2017 debut hit #1 and went triple-platinum in its homeland, launching hits such as “Take My Hand”, "Never Change" and "Addicted to You." It was named Album of the Year at the Irish Post Music Awards and had Picture This selling out stadiums within a year. Some bands might crumble after that -- or at least feel the pressure. But for its second album, MDRN LV, Picture This felt charged to make "something even better than we did the last time out," according to front man Ryan Hennessy, and achieves that with a tightly crafted 12-track album that indeed builds on the virtues of Picture This to advance the band, and its music in bold fashion. "It feels amazing," Hennessy says from the studio where Picture This worked on much of MDRN LV. "We changed the track listing of the album 10 times 'cause we kept writing songs that were better than the songs we'd already written. We keep changing and evolving, and now we're happy and ready to share it with the world." Sitting alongside Hennessy is drummer Jimmy Rainsford, Picture This' other chief songwriter, and bandmates Owen Cardiff (guitar) and Cliff Deane (bass). Hennessy adds that they all were more energized than apprehensive as they followed up their tremendous debut success. "People talk about it -- 'Oh, the second album has to be better' and all that," Hennessy says. "We don't feel any pressure because we produce and write music in a different way than a lot of other bands. We're constantly writing; If I go a day without writing a song or two, I feel disappointed. So where a lot of times bands will have to go and spend six months to do an album, we just write as we go and then keep writing and the songs are always there. When we finish one song another song comes along, which is great." MDRN LV, co-produced by Jayson Dezuzio (Imagine Dragons, X Ambassadors), is composed of 12 songs, tightly crafted and dynamically dazzling, with sophisticated arrangements that build into surging, hooky choruses that are ready for singalongs by the second go-round. There's range in this mix, too; Tracks such as "More Than Just Tonight," and "Modern Love" are fully in sync with the contemporary pop conventions, while "One Drink" mines taut, funky grooves. The group gives producer Dezuzio plenty of props for helping to direct the sheer volume of possibilities it was creating in the studio. "Within an hour in the studio together we were like, 'Omigod, this guy is completely transforming these into unbelievable songs.” Rainsford says. “He's brought them to a place we never thought they could go. He just had great ideas. From there it was like, 'Can he do ALL of our album?'" Hennessey feels that Picture This' growth can also be heard in MDRN LV's lyrics, drawn from "a combination of many experiences I've had" but also benefitting from the perspective he brings to them now. "The best way to sum up the difference is on the first one I was like 19, 20, 21, living in Ireland, just finished school, never experienced anything outside of that," he explains. "Then the band took off out of nowhere and I've been all over the world in a year I never could have imagined. I met some inspiring people, all this crazy stuff has happened to us. We’ve all grown as people and as a band, and that all very much influenced this album." With MDRN LV coming out, Picture This is most excited to take it out into the world again, hitting the road to not only affirm its stature at home but also find new territories to conquer. And having more music will be key to that. "Now we have more choices of what we can play live," Rainsford says. "It's more reassuring to us to have such a big body of work. And we can look at this album and where we've gone from the first album and be proud.” To which Hennessy adds, "The main thing is the music is better and evolving. We're ready to take on the world now.”