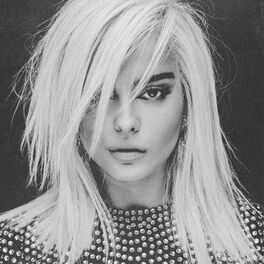 Call You Mine - The Remixes

I Got You: The Remixes

I Don't Wanna Grow Up

I Can't Stop Drinking About You Remix EP

You Can't Stop The Girl (From Disney's "Maleficent: Mistress of Evil")

A glamorous and vibrant American pop star, Bebe Rexha has been compared to Nicki Minaj, David Guetta and Rihanna and is also notable for her success from a young age as a songwriter, writing hits for Eminem and Rihanna, in addition to her own impressive run of hits like 'Me, Myself, I' with G-Eazy, 'In the Name of Love' with David Garrix and 'The Way I Are' with Lil Wayne. She has also collaborated with Louis Tomlinson of One Direction and earned a parallel career as a presenter at awards shows. From Brooklyn, New York she describes herself as a "New York chick who grew up on hip-hop", although her background was more unusual than most as her parents were Albanian immigrants and she cut her teeth as a child performer in musicals and singing in the school choir, while she also played trumpet for nine years before teaching herself to play guitar and piano. She also developed her skills as a pop/R&B songwriter and won the Best Teen Songwwriter Award at the National Academy of Recording Arts & Sciences annual Grammy Day. This led to her enrolling in songwriting classes in New York. She met and worked with Pete Wentz of Fall Out Boy, becoming lead singer of his new band Black Cards and then in 2013 was signed by the Warner Brothers label as a solo artist. She had a lot of success with her songwriting - Selena Gomez had a hit with 'Like a Champion', Nikki Williams with 'Glowing' and Eminem and Rihanna with 'The Monster'. Her own debut single 'I Can't Stop Drinking About You' was released in 2014 followed by 'I'm Gonna Show You Crazy' and 'Gone'. She had her first major hit singing with G-Eazy on 'Me, Myself, I' and her natural talent for writing irresistible pop hooks and lively personality gave her a high profile, collaborating with Nicki Minaj, Lil Wayne and Louis Tomlinson and touring with Ellie Goulding. By the end of 2017 she was working on her new album 'Expectations'. Artist biography compiled by BDS/West 10. All rights reserved