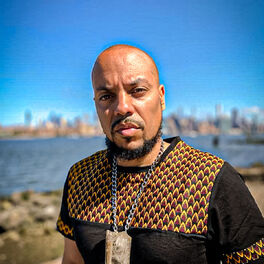 The Stuff of Legend

King of the North Star

Bilingual, Hip-Hop/Afrobeat artist, Napoleon Da Legend transferred his skills on the basketball court to the wax. Before that, he had to teach himself English. He kept his ears glued to the radio. Paris-born, to the Comoros Islands, then Washington DC raised, the son of an immigrant family, Napoleon is a Brooklyn-based artist who uses his voice as weapon of hope, social-critique, conquest, and joy. After an untimely split, his parents left the U.S. and went their separate ways leaving the 16 year old to fend for himself in the DC / Maryland area, which helped him develop his hustle, instinct and work-ethic. NDL’s song “Black Privilege” led him to be featured at the Essence Festival in 2017. He was then invited to perform live on FOX 5’s Good Day DC. NDL’s message of empowerment, community, and self-determination through music doesn’t stop there. He also works regularly with youth, running hip-hop workshops in Brooklyn’s toughest schools and Rikers Island’s juvenile programs. Following the release of his “Steal This Mixtape” series in 2016, Napoleon headlined his “Steal This Mixtape” European Tour. He’s been featured on Statik Selekta’s Show Off Radio Show and Sway Calloway’s Sway in the Morning. To top all this, he graced the stage at the final Rocksteady Crew’s 40th Anniversary show at SummerStage in Central Park. In 2019, NDL performed in Europe’s biggest Hip-Hop Festival Hip-Hop Kemp in Czech Republic as Supa Kaiju with rapper/producer Sicknature. 2018 was yet another prolific year, without a doubt. Napoleon released 10 projects- including four albums, four mixtapes, and two EP’s released through various indie labels (Chopped Herring, Media Pop, Copenhagen Crates and Tuff Gong Records). This was followed by eight appearances in 2019 at Harlem Week's main stage. He then became recognized for his fusing the world’s of Hip-Hop and Anime with albums Dragon Ball G (Dragon Ball Z), Bronze Saints (Saint Seiya) and King of the North Star (Fist of the North Star) in a feature article on Bandcamp (How Napoleon Da Legend Made Anime-Inspired Rap an Artform). Since then, NDL has released 12 more projects, including the afrobeat/hip-hop fusion projects, "Afrostreet" & “Afrostreet 2”. After creating a few anthems ("Poulet Maafe"), which became popular with his French speaking audience, NDL decided to put his French powers into high gear. In September, 2019, he gave his first in interview in French with Mediapac (Watch it here), garnering over 100,000 views in less than a week. In May 2020, NDL featured on elite French rapper Akhenaton's (IAM) “Asteroïde” project, trading verses in French and English on the innovative song “Storytellers”. In 2021, NDL was invited to adapt Akhenaton’s 19 minute song “La Faim de leur Monde” in English. They later collaborated on a 3-part EP series called “The Whole in my Heart” produced by Akhenaton on his label La Cosca.