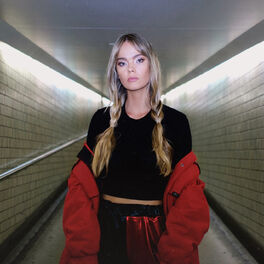 Butterflies (The Rush Inside)

Nothing But... Essential Nu-Disco, Vol. 3

After years of studying music at school, and a childhood soundtrack made up of her older sister’s record collection of Ms. Lauryn Hill, Janet Jackson and TLC and her mum’s favourites Moby and Massive Attack, MAYAH's music features inventive melodic song structures fusing R&B, hip hop and electronic staples. For years music took a back seat while MAYAH committed herself to studying. It didn't take long for it to re-emerge as a priority for the Cairns-born artist. After completing her exams, she took a leap into the deep end, moving to New York City to pursue any possible musical connection. Working ‘shitty waitress jobs’ she'd visit studios after her shifts to get her voice heard. Through an incredible series of events – that involved a ride in a NYPD car to Long Island where she ate hummus in Shaggy's kitchen while he rapped and watched his producers work on a G-Eazy record – pieces began falling into place. The pros recommended she train with legendary vocal coach Craig Derry (Alicia Keys, Mary J. Blige and D'Angelo). With her debut single ‘Pray’, MAYAH contemplates if the thing she really needs is "that simple life". If this track is a predictor of things to come, it seems likely she'll have anything but.