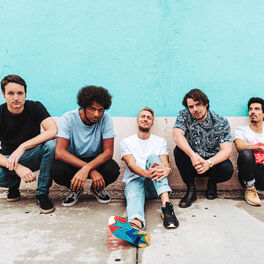 Shot In The Dark

One For The Mrs.

100 Most Relaxing Songs Ever

Chef’Special is a five-piece popband from the Netherlands with a unique blend of hip-hop, rock and reggae. Since their formation in 2008, Dutch band Chef’Special has released four albums and toured extensively across Europe and the US. In spring 2020 they release their new studio album ‘Unfold’. This is the successor of their album ‘Amigo’, which reached a platinum status in the Netherlands and gathered over 62 million streams worldwide. Whether Chef’Special is touring America as support act of Twenty One Pilots, performing on the main stage at festivals like Pinkpop, Sziget or Lowlands, or in huge sold-out venues like the Ziggo Dome (16.000 cap) in Amsterdam; they always convince the whole audience and turn every show in a party. Although Chef’Special’s musical palette encompasses various genres, the band has a very recognizable sound in which their own emotions and experiences are front and center. That’s especially true when it comes to the Chef’Special breakout single “In Your Arms” about singer Joshua’s father passing away.