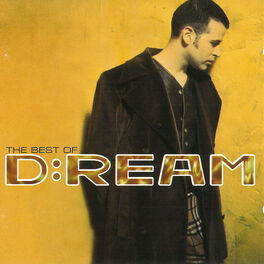 U R The Best Thing (Remixes)

All Things to All Men

The Power (Of All The Love In The World)

Party Up The World

Shoot Me With Your Love

Blame It On Me

Things Can Only Get Better

U R The Best Thing

As Tony Blair and the Labour Party swept to an historic British General Election victory in 1997, it was D:Ream's euphoric pop anthem Things Can Only Can Get Better that rang out as the official campaign anthem, and had the embarrassed MPs shuffling along awkwardly as the results came in. Based mainly around front-man Peter Cunnah, the band also included multi-instrumentalist Al Mackenzie and Professor Brian Cox on keyboards (now presenter of the BBC science show Wonders of the Universe) who was then studying for his PhD. The project came together when Curran's former band Tie The Boy split and the Northern Irishman used his production skills to re-work his old rock songs into tracks inspired by London's growing dance scene. Full of upbeat synth pop, debut album D:Ream On Volume 1 (1993) initially became a hit in clubland but made a huge mainstream breakthrough when Things Can Only Get Better shot to Number 1 when re-released in 1994. Follow-up single U R The Best Thing smashed its way to Number 3 in the UK and the album remained in the charts for 37 weeks. Second album Word (1995) reached Number 5 and produced the Top 10 hit Shoot Me With Your Love but, after touring with Take That, the General Election gave them their last big moment in the spotlight.