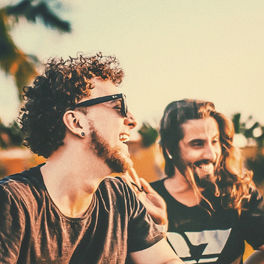 Rhythm of the Night

For the last 8 years Cariocas Felipe "Fel" Lozinsky and Gustavo "Guk" Rozenthal have been known as great references of dance music. Since 2007, Felguk has invaded the ears and excited audiences around the world through clubs and festivals. With their unique sound and attitude they know anything can happen on the dance floor.   The two friends met at a production company where they worked and started making music after hours. From there began an incredible success story. Having signed official remixes for Madonna, Black Eyed Peas, David Guetta, Flo Rida, and several others; Felguk has been able to reach the top of the charts with their unique sound. In total there are 12 hits in the Top 10 Beatport electro, and their track ‘New’, with Dimitri Vegas & Like Mike and Tujamo, reached the first general position of Store ranking. In 2010, the duo’s international career reached new heights when their song '2nite' was chosen as Electric Daisy Carnival’s theme song in the same year. Throughout their career, Felguk has played the biggest festivals of the world such as EDC Las Vegas and Los Angeles, Tomorrowland in Belgium, Ultra, Lollapalooza, Rock In Rio in Brazil, Burning Man and more. Already this year, the pair has participated in important events such as the first edition of Rock in Rio USA, and the first edition of Tomorrowland in Brazil.   As the only Brazilians listed in the DJ Mag Top 100 for four consecutive years, they add a legion of fans including renowned artists. In 2012, a successful partnership with the Queen of Pop, Madonna, intensified even more with the participation of the duo throughout the Brazilian leg of the MDNA world tour. Felguk opened all shows in Brazil to completely sold-out stadiums. Felguk has already took their sound to all corners of the globe by tours with Madonna, remixes for the biggest names in pop music, collaborations with the biggest DJs of the scene, and memorable performances in the biggest festivals in the world. With their unmistakable energy behind the decks, Felguk is ready to continue leading with their style, brand a huge success, and continue building beyond their eight years of partnership.