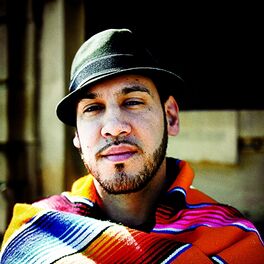 Boogát is a Canadian-Mexican musician from Montreal (Qc, Canada), blending hip-hop with Latin Music styles such as Cumbia and Reggaeton. He won the ”Juno Award” and the ”Félix Award” for ”World Music Album of the Year” for his album ”Neo-Reconquista”, respectively, at the ”Juno Awards 2016” and the ”ADISQ 2016”. Of Paraguayan and Mexican descent, he was born in Québec City to immigrant parents and raised in the ”Beauport” borough of the city, then moved to Montreal in 2001 where his career took off. Performing initially in French, Boogát switched to Spanish after playing with Latin Music group Roberto Lopez Project and Electro producer Poirier; discovering a new world of possibilities that opened doors to collaborating with artists such as Frikstailers, Uproot Andy, El Hijo De La Cumbia, Radio Radio, Lido Pimienta, El Dusty, G-Flux, Sotomayor, Super San, Niña Dioz, Mati Zundel and El Remolon, amongst others. He released his first full-length Spanish album ”El Dorado Sunset” in 2013. The album won two ”Félix Awards” for ”Best World Music Album” and ”Producer of the Year” at ”ADISQ 2013”. He has been touring non-stop in Canada, USA, México, Argentina, UK, Germany, Netherlands, France, Czech Republic and Spain ever since. ”Neo-Reconquista”, which includes collaborations with La Yegros, Sonido Pesa’o and Pierre Kwenders, was released in 2015.