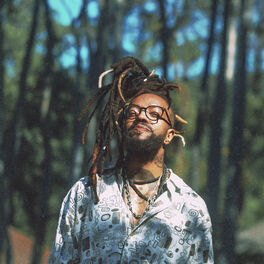 Linha do Equador - Do Quintal (Session)

Rei do Luau - Do Quintal (Session)

Born and raised in São Paulo, Rael released his first solo album, "MP3: Música Popular do Terceiro Mundo" in 2010 and with him, toured Canada. In 2013, “Ainda Bem Que Eu Segui As Batidas Do Meu Coração” came, the first by the Fantasma Laboratory, produced by the North American duo K-Salaam & Beatnick, with which he also did an international tour, this time in the USA. In 2014, he put the EP “Diversoficando” on the streets, available for listening on walls in São Paulo and Rio de Janeiro on devices installed by the musician himself. “Coisas Do Meu Imaginário”, released in 2016, was produced by Daniel Ganjaman and featured by Chico César, Ogi, Black Alien, among others. Critical success, the album was nominated for awards such as APCA (São Paulo Association of Art Critics) and Latin Grammy, and winner of the Brazilian Music Award. In 2019, Rael releases his fourth studio album, entitled “Capim-Cidreira”. With the participation of Melim and Thiaguinho, the album starts from the personal experience of a depressive period to build a light, dancing and energetic repertoire. In 2020, came the EP “Capim-Cidreira (Infusão)”, which brings new versions of songs already known, and “Rei do Luau”, music with IZA. In the same year, in addition to a live on YouTube featuring Emicida, IZA, Kamau, Pentagono, Mariana Nolasco and Melim, Rael started the project “Do Quintal (Session)”, a series of videos in which he interprets his successes in another guise and tells the story of the chosen songs.