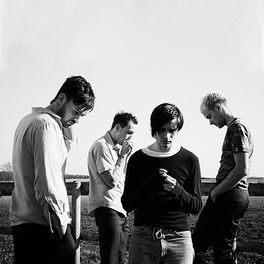 A Brief Inquiry Into Online Relationships

I like it when you sleep, for you are so beautiful yet so unaware of it

If You’re Too Shy (Let Me Know)

Led by front man Matt Healy, the son of actors Tim Healy and Denise Welch, Manchester's The 1975 take inspiration from the 1980s pop of Michael Jackson and Prince, the art school new wave of Talking Heads and Scritti Politti, and the 1990s R&B of D'Angelo and TLC to create modern, anthemic indie rock.

Starting out as teenagers thrashing out punk covers at local youth clubs, the band signed to indie label Dirty Hit in 2012 and had early EPs 'Facedown' and 'Sex' championed by Radio 1 DJs Huw Stephens and Zane Lowe. Single 'Chocolate' made the UK top 20 before their self-titled debut album, produced by Mike Crossey, topped the UK charts and won praise for its grand ambition and rousing, crescendos of infectious indie pop. The band went on to support Muse, The Rolling Stones and Bastille with a sell-out show at London's Royal Albert Hall in 2014.

Their second album, 'I Like It When You Sleep, for You Are So Beautiful Yet So Unaware of It', released in 2015, topped the UK Albums Chart and the Billboard 200, also being shortlisted for a Mercury Music Prize. They followed this success with 'A Brief Inquiry Into Online Relationships' in 2018 with a fourth album set for 2019.