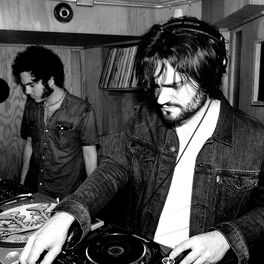 Kitsuné Tabloid by The Twelves

Known for its “delightfully bizarre” (Vice) spin on indie-dance, French Horn Rebellion (FHR) is a music project that combines dance-punk, French touch, and electro with classic songwriting sensibilities. Now used as the artist moniker of lead singer/producer Robert Perlick-Molinari, it was originally co-founded by Robert and his brother David Perlick-Molinari in 2007. Both currently work at David’s production studio in Williamsburg Brooklyn, YouTooCanWoo, and curate a new indie disco and house record label, toucan sounds. In 2007, Robert was a young classical horn player in the Chicago area making beats on his laptop, and throwing house parties. Finding more joy in electronic/dance music than in the classics, he with the help of his brother David (who had recently produced MGMT’s Time to Pretend EP) created FHR and the duo released their first single together, ‘Up All Night.’ Soon after, Robert booked a 30-show national tour (mostly using Myspace) from Brooklyn to El Paso, playing every DIY electro party along the way. From the friends they made that year, FHR was invited to play SXSW, sparking interest from the dance scenes of London and Paris to Seoul and Tokyo. As a poster child of Brooklyn eclecticism, they received steady radio play on BBC’s Radio 1 and event performances with Les Inrocks and Kitsuné Maison. In two years, the brothers went from playing the punk-venue basement at Lit Lounge in Manhattan, to the basement of the Louvre in Paris for the show of famed fashion legend Jean Charles de Castelbajac. Over the last 10 years FHR has performed as a DJ as well as a live band across 5 continents, while collaborating on stage and in the studio with some of the most influential music artists of our time including official remixes for Beyoncé, Two Door Cinema Club, Sia, OMD and tours with Of Montreal, Cut Copy, Yelle, Hot Chip, SebastiAn as well as original studio collaborations with St. Lucia, Autograf, Jody Watley, The Knocks and many more. They have received praise from some of the world's leading media outlets including The New York Times, Billboard and The Huffington Post. LA Weekly said, “We wish America had a million bands like this,” while in the UK,The Guardian regarded FHR's music as “killer dance-pop.”