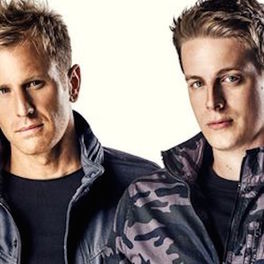 Out My Mind (Live Session)

Out My Mind (Club Mix)

Until You Were Gone (Remixes) (feat. Emily Warren)

Until You Were Gone (feat. Emily Warren)

The American production and DJ duo of Chad Cisneros and Dave Reed have firmly situated themselves as one of the most electrifying acts in the international EDM scene. Their zest for life and music is apparent to anyone who’s witnessed them in person or through their speakers and is just one reason why they resonate intensely with their loyal followers, “Tritonians.” After earning a spot on MTV Clubland’s “10 Artists to Watch in 2013″ list, TRITONAL have continued to launch track after track on to the Beatport charts and ignite dance floors around the world with their energetic and unforgettable sets. The duo unleashed their debut studio album to the world in 2011 with “Piercing the Quiet”, which produced eight Top 20 Beatport singles including five that held the #1 position on the Beatport trance chart for more than three weeks. Currently masters of their own “Metamorphic” series of EPs, TRITONAL conjures its audio alchemy with revelatory releases like the recent “Metamorphic I” featuring “Bullet That Saved Me” and “Follow Me Home”. “Metamorphic II”, out November 25, 2013 features the recent smash hit “Now Or Never” as well as the buzzed about and as yet unreleased “Electric Glow”. Having just wrapped their first 40-city headlining North American “Metamorphic” tour, TRITONAL continuously receive peer support by fellow DJ kingpins including Armin van Buuren, Hardwell, Tiësto, Ferry Corsten, Steve Aoki, Markus Schulz, Gareth Emery, Nicky Romero, and many more.