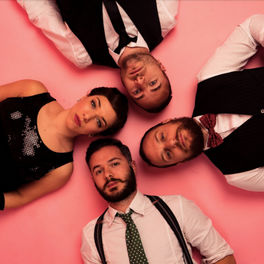 The Queen of Swing

SWINGROWERS (pronounced Swing Grow'ers) are an accomplished four-piece band from Palermo in Sicily; Loredana Grimaudo (vocals) Roberto Costa (production), Alessio Costagliola (guitar) and Ciro Pusateri (saxophone). Known for their string of superb singles, albums and EPs as well as their incredible live shows, the band have done official remixes for platinum selling artists like Caro Emerald (Grandmono) or Millie Smalls (Island Records) and tours with bands like Caravan Palace or Parov Stelar. They've also toured North America, Europe, Japan and India in their own right and have performed at literally hundreds of festivals around the world including the main stage of the Blue Note Festival in Japan. Their sound is a mix of styles from jazz to hip-hop, electronica to gypsy swing but has been steadily evolving since their debut into a unique vintage-inspired pop. The first album, PRONOUNCED SWING’GROWERS (2012), was largely a sample-based affair very much in what was to become the electro-swing genre. This was followed by the single QUEEN OF SWING (2013) with London-based brass section and producers Gypsy Hill. 2013 also saw the start of the series of cover versions that became the DO NOT COVER EP (2014) featuring guests The Lost Fingers on PUMP UP THE JAM and the bands version of Paulo Conte's Italian classic VIA CON ME . Follow-up album REMOTE (2014), with singles THAT'S RIGHT! and MIDNIGHT. With multi-million views on YouTube and a hectic touring schedule, the band have settled into their current incarnation and following the success of the single BUTTERFLY (2017) release their 3rd full length album OUTSIDEIN in 2018.