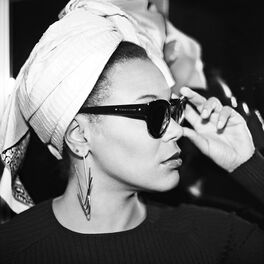 China is a woman of the new millennium. Born in the United States and raised in France, she is multi-dimensional in her pursuits. As a professional vocalist, songwriter, music producer, television and radio host, China recently released her fifth studio album, “Crazy Blues”, in conjunction with a licensing deal between Universal Music Group International and her own production company, MadeInChina Productions. Balancing an international tour schedule with her other professional interests, she has produced documentaries and radio programs through her production company. Additionally, China co-founded Notorious Communication, a full-service public relations firm focusing on Fashion, Culture and entertainment, whose campaigns service top-tier clients, including Vans, Etnies, Nike and New Look among others. Having signed her first contract with Virgin Records France at the age of fifteen, China has since navigated the French media world while developing her artistic career. In 1999, she launched her TV career on French music channel MCM, then joined the ranks of MTV International, in 2004, as "On Air" talent and music journalist for MTV France, where she worked until this year. She spent a year appearing on France’s prime-time TV talk show, “Le Grand Journal,” airing on Canal+ and hosted a daily on-air show on JazzRadio. Out of these projects, China created a music sponsorship program for the ERDF group, for which she serves as an advisor. Beyond her professional ventures, China is an active philanthropist. She is developing an ambassadorship program with UNESCO partner, International Music Council, to promote musical diversity and open access to culture. She routinely lends her participation to charitable ventures, such as “Solidarité Sida” (AIDS Solidarity) and “Tout le Monde Chante Contre le Cancer” (Everyone Sings Against Cancer) and is an advocate of the arts in education.