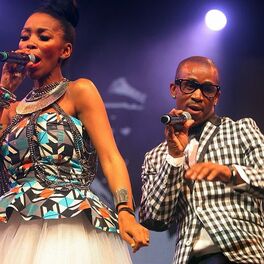 Mafikizolo has been synonymous with excellent music over a period of nearly twenty years. They have created a slew of hits, appealing to a large cross-section of fans. After their hit album, Six Mabone (released in 2008), the duo decided to take some time off from the group – just to take some respite and focus on personal ideals. Now – the superlatively talented Mafikizolo is ready to bring their music back to their fans – with a new album that is aptly titled “Reunion The tone of “Reunion” is delightfully old-school with a strong throwback to the 50’s and the 60’s. The arrangements are varied – ranging from foot-tapping tracks to downright brilliant party-numbers. Two major hits have already shot up the charts from this juggernaut of an album. The infectious Khona, featuring Uhuru is already spreading across South Africa like wildfire – and it just takes one listen to see why. The track is catchy and clearly set for the record books. Happiness is equally stunning – showcasing the unparalleled musicality that Mafikizolo is famous for. The duo have also made international waves with “Reunited” - The brilliant duo have been nominated for two Channel O Africa-Awards, a MOBO-Award and an MTV EMA award, reifying their reputation as a South African act of international calibre. Universal Music South Africa is proud to represent the prolific Mafikizolo. “We are very pleased that we have an opportunity to bring a fantastic new Mafikizolo-album to their fans. It is time to celebrate the return of one of South Africa’s leading acts. Universal Music knows how to celebrate – we have earned our motto: ‘It’s not a party without us!’” says Thabiso Mogwathle, Marketing Manager – Local Division of Universal Music South Africa. After a long wait fans will be blown away by this brilliant album chock-full of sure-fire hits and the brilliance that Mafikizolo are known and loved for. Mafikizolo’s Reunion is currently on shelves across the country.