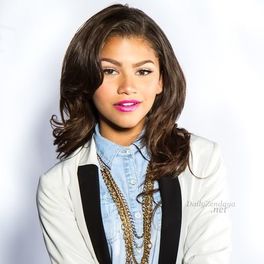 All For Us (from the HBO Original Series Euphoria)

Neverland (From Finding Neverland The Album)

Dig Down Deeper (From the film "Pixie Hollow Games'')

par Zendaya, Bella Thorne, The Cast of ''Shake It Up: Break It Down''

Shake It Up: Made In Japan (Original Soundtrack)

Digster Pop - Back To School

Finding Neverland The Album (Songs From The Broadway Musical)

Zendaya's name means 'to give thanks to God' in the Bantu language but she was born and brought up in California. After training with the American Conservatory Theater in its Shakespearean drama programme, she began her professional career as a fashion model. She was also an actress in TV advertising and a dancer. Her big break into acting came in 2009 when she won the role of Rocky Blue in the Disney TV series 'Shake It Up'. Two years later she released her first single, 'Swag It Out', independently. This was followed in the same year by her first collaboration with Bella Thorne outside of the 'Shake It Up' TV show with the single 'Watch Me'. A year later she appeared in her first film role playing Halley Brandon in the Disney movie 'Frenemies'. She continued to release singles promoting herself and was finally signed in 2012 by Hollywood Records (a subsidiary of Disney). Zendaya is also an author, publishing her autobiography 'Between U and Me: How to Rock Your Tween Years with Style and Confidence' in 2013. That year also saw the release of her eponymous debut album which was followed with the news that she was working with Timbaland on her yet to be released follow-up album. 2016 was the year she expanded her acting range with the role of Michelle 'M' Jones in the movie 'Spider-Man: Homecoming'. This was followed by her role as Anne Wheeler in 'The Greatest Showman' alongside Zac Efron and Hugh Jackman. Zendaya continues to release singles but is concentrating on her movie acting.