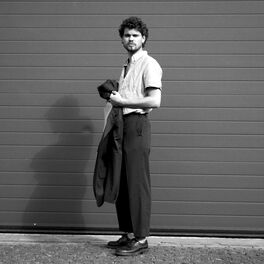 The Tales of Antheon the Rabbit

The Girl With No Eyes

LOKI is the name songwriter and producer Marc Grünhäuser chose for himself when he started working on his Debut-EP "The Tales of Antheon the Rabbit", which he elaborated and released in collaboration with fellow artist Anna Balthasar at the end of 2019. The single "The Girl With No Eyes" became an underground hit in the folktronica scene and ultimately led to an award at the popNRW Awards in the newcomer category. After a few solo shows in early 2020, the LOKI live group (consisting of Christoph Erling, Philip Ahrens, Kai Dombrowski and Lars Kruse) formed around Grünhäuser, which would later become a permanent part of the studio crew. Following the release of the single "Blood" Grünhäuser withdrew to work on the second EP "Intimacy" and produced it in collaboration with Erling and Ahrens. Currently, LOKI is back with Balthasar, shooting a musical short film to further contextualize the coming release of „Intimacy“.