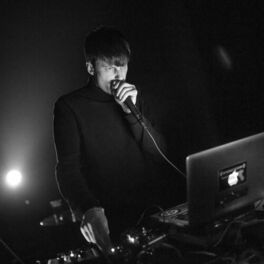 Time We Left This World Today

How Deep Is Our Love?

They Fall but You Don't

Best Of The Week

Paul Régimbeau, aka Mondkopf, is a household name among the edgiest international festivals such as ATP, LUFF, Bozar or CTM, post-industrial warehouses of northern europe, industrial parties (Berghain in Berlin, Kaos in London) as well as more solemn atmospheres of churches, museums (BAL, Pompidou Center in Paris) or auditoriums (Philarmonie de Paris, Lyon’s Auditorium). Mondkopf has put forward his talents as a live artist, giving his melodic ambient music a power and a rager inspired by extreme metal. After a long period of solitary evolution, he has developed in this last years multiple collaborative projects, with Charlemagne Palestine, Saaad (in Foudre), Autrenoir, Oiseaux-Tempête, the japanese black metal band Vampilia and the noise american artist Pete Swanson (in VMO), libanese guitarist Charbel Haber (in Good Luck In Death). After co-founding In Paradisum records in 2011, he has been running since 2018 the record label Nahal Recordings with Frederic D. Oberland, gathering a community of outsiders around a shared passion for live improvisation, the mix of rock structures and sound synthesis, and cinematographic atmospheres. Wire Magazine described his last album, They fall but you don’t, as the "the only music that fits that once promising and much abused term power ambient: massive sharp-edged drones, slow lightning cracks of guitars, Tangerine Dream synths curling around one another, everything glowering with an inner intensity that still feels closely reined in". Indeed, while Mondkopf’s music has long been rather dark, heavy and abrasive, his trajectory testifies for a profound attachment to a sound that associates harmonic flourishment with experimentation, which doesn’t come as a surprise when you learn that he grew up listening to Tangerine Dream, Steve Reich, Terry Riley, Morton Feldman, Brian Eno, Ash Ra Temple or even Vangelis. His last compositions, gathered on How deep is our love, can be linked to the epic dimension of Rafael Anton Isarri, the extended temporality and meditative qualities of Pauline Oliveiros or Sarah Davachi, the work on analog textures of Mind Over Mirrors. But the kind of purity and innocence glowing from the record, which have been the signature of his music from more than ten years, are nothing but his very own.